I met Steve, Jay and Matt at Underhill State Park on Thursday evening after spending the day at Grand Isle State Park (I know, I lead a difficult life). Mt Mansfield is the first immovable mass blocking your path as you approach from the west, its size and impressiveness grows as you drive through the wide Champlain Valley on the approach. 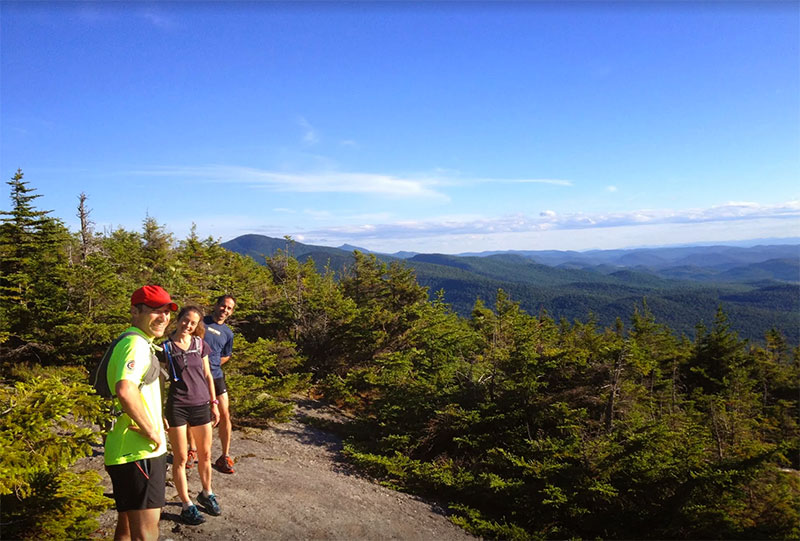 We had the perfect day for this trail run, eighty degrees, sunny and dry. I arrived a little early and spent some time talking with Jacob, the Underhill State Park Ranger. He advised me that typical speedy trail runners can run the loop we planned in about 4 hours and the distance was longer than we read on the map. We were talking while he dragged away some large beech limbs he had just trimmed using a method I will not divulge here.

Our planned route was the CCC Road to Maple Ridge Trail, across on the Long Trail and then descending Sunset Ridge Trail. The potentially disappointing news about the inaccuracy of our map was tempered by Jacob booking us into newly painted Ash lean-to for the night. If you are unfamiliar with Underhill State Park, Ash is the second nicest lean-to in this beautiful campground with walk-to only sites.

We set out around 6pm from the parking area in front of the park office. The CCC Road is a nice moderate climb and then slight descent to the Maple Ridge trailhead. Once again I am amazed at the work of the CCC boys and their ability to create long lasting infrastructure. The road is in nice shape, it becomes more of a tote road as you get higher on the mountain, but it still has even footing.

Maple Ridge is a beautiful trail. From our approach on the CCC Road, you do not need to climb very far up the Maple Ridge Trail before you are on the open ridge with schist under your feet and incredible views all around you. It’s a good thing the exposed rock under your feet is so stable, it’s easy to get distracted by the view and not pay any attention to what your feet are doing.

Popping out of dense forest and standing on the same rocks, which I watched grow larger as I drove toward Underhill earlier that day, was a magical moment. It’s such an abrupt experience moving from a forested habitat directly into an alpine zone. We timed things right, the extremely rare Mountain sandwort flowers were blooming everywhere across the entire ridge. These little white flowers bloom only a short period of time in July, and I have never witnessed this before. They are really striking, patches of white emerging from green pincushions of moss and plants clinging to life on the exposed mountaintop rock.

Maple Ridge concludes at the Forehead, where we stopped and enjoyed some snacks before running the entire ridge along the Long Trail to the chin. This stretch is also full of distracting views and schist under-foot, and includes a little bit of work road which is a kind of a bummer when you run through thick forest and up over rocks for a couple hours to get there. Still, all the views afforded on this stretch are well worth the effort and make me willing to overlook the work road experience.

If you have never enjoyed the view from the chin on Mt Mansfield, you should stop what you are doing and head directly to Underhill State Park. We stood on top of Vermont, looking out at Lake Champlain and the Adirondacks to the west and beautiful green Vermont in every other direction. Standing on the chin, we could clearly see the profile of Mt Mansfield and all its facial features in the shadow in the valley below us. On this clear evening we looked to the south and north along the entire ridge of the Green Mountains. I felt connected to every peak in Vermont at that moment.

The giant red sun was beginning to sink low on the horizon and an enormous moon (just a couple days before the full super moon) was rising golden in the sky. This was the perfect combination for a stunning sunset, with a few clouds above the Adirondacks. We had some more food, changed into dry long sleeve shirts and then started our descent on the Sunset Ridge trail.

That big red sun continued to slide down the sky, and we stopped to watch it drop behind the Adirondacks while standing on the aptly named Sunset Ridge. I cannot remember the last time I watched the sun sink down below the horizon like that. If you have not enjoyed that moment recently, I highly recommend taking the time to slow down and witness the end of a day.

Sunset Ridge is as rock exposed as Maple Ridge, with incredible views. Shortly after we entered the woods after the exposed section, we turned on our headlamps to help us see the footing. There are lots of stone steps and stepping rocks on this stretch of trail. Quickly after turning on our lights, we reached the trail head at the CCC Road where we made a quick descent to the campground and Ash lean-to. We enjoyed some hotdogs and sausages grilled by Jay and washed down with PBR and Wolaver’s Brown Ale.

Steve and I were the lucky two who enjoyed a peaceful night’s sleep in our comfortable lean-to and woke to sunshine and Robin songs Friday morning early. This whole running adventure took 3 hours and 24 minutes and logged 8.16 miles on Steve’s Garmin watch and 8.4 miles using Jay’s iPhone app. So the total mileage is still undecided, but there is no debate about the incredible experience it was to run to the top of Vermont with good friends.